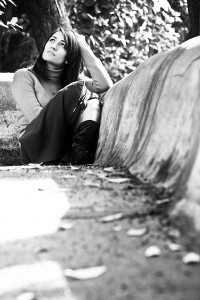 What’s wrong with me?  That’s often a question that single Christian women ask when it comes to dating or finding a mate.  After being a single widow for over five years, I started to ask myself the same question.  Friends say you are so pretty and smart.  Don’t worry God will send someone at just the right time.  Somehow those words just don’t seem to be so comforting when you are feeling lonely.

I’ve heard other women say, “There are just no good men out there.”  I beg to differ.  I’ve met a lot of extraordinary Christian men who would make someone a wonderful husband and be amazing fathers. They fit many checklists for several women handsome, educated, career focused and loving.  So, what is the problem?  Either they weren’t interested in me or I wasn’t interested in them.

To make matters worse, I began to see other single Christian women who were in relationships.  They were not necessarily the best choices.  However, the women were very content with having a man by their side.  They were either dating married men, unsaved men, or men without jobs. How could I knock that?  They seemed happy for the moment at least.

I began to pray one day. “Lord, what is going on?  I serve you faithfully.  I seek your word.  To the best of my abilities, I am trying to obey everything you tell me to do.  Why is it that I meet nice men but nothing happens. What’s the problem?”

I began to think to say to myself, “Maybe I should just settle and take any man. Maybe he doesn’t have to be ‘so spiritual.’ Maybe I need to lower my standards.”  I began to think about compromising the standards I have for a mate.

Please know that I’m not one who has a checklist a mile long.  My checklist is God’s list.  He must be a believer in Jesus Christ who is filled with the Holy Spirit. (2 Corinthians 6:14) He must have a job because the bible says if a man doesn’t work, he cannot eat. (2 Thessalonians 3:10)  He must be able to lead his family in the things of the Lord. (Ephesians 5:23-25) He must be able to make me laugh.  Well, that one is not biblical but it is on the list.

One day as I was reading my bible and I came across Ruth 2.  Ruth was a widow who left everything she knew to follow her mother-in-law Naomi after her husband passed away.  Ruth chose to believe in Naomi’s God. There was no indication or hope that Ruth would ever marry again.  In those days, there was no social security or welfare or government assistance.  If you were a widow without a son then you were left on your own to starve to death unless someone would marry you.

Naomi instructs Ruth to go into a relative’s field and glean (or pick up the scraps of wheat).  She catches the attention of the owner of the field named Boaz.  He tells her in Ruth 2:8 “Do not go to glean in another field, nor go from here, but stay close by my young woman.”

It was as if God was saying to me, “Don’t start looking in other fields for a husband.”  In other words, don’t back off of your standards.  Don’t quit living obediently for God and trusting that he has someone in your life.  Don’t start dating like the world.  Don’t give up being celibate because you are feeling lonely.  Don’t look to the right or left but keep your eyes on Christ and he will send you the right person.  Stay close to God and to his plans for your life.

As a single pastor, it seems like I have no problem finding great men who are interested in me until they discover that I am a pastor. It’s almost like I have the plague!

I read a little further and Ruth 2:9 says, “Have I not commanded the young men not to touch you?”  I began to think that the reason men were not interested wasn’t because of me!  Thank you Lord!  It was because God said that I am his anointed.  I am special and have a purpose and a plan.  God commanded that these men not touch me because they weren’t the right one’s for me!

I realized that if some of the men that I had met were interested in me they would not have been God’s best for me.  I want God’s best and his perfect choice for a husband in my life. I don’t want to settle for a sloppy second hand choice that I made.  Marriage is hard enough.  It’s especially difficult when you are married to the “wrong person.”

Every person who has made Jesus Christ Lord of his or her life is anointed.  They are special.  They matter to God.  Each person has a unique plan and purpose that is ordained by God (Jeremiah 29:11). If you are single, don’t worry if you haven’t found “the one” yet.  God just may be commanding the young men or women not to touch you!

This is exciting news because I discovered it’s not that there is anything wrong with me.  God has just simply said if you are not the one then don’t touch my anointed one! (Psalm 105:15)  God has given us a protection from the wrong person in our lives.  We shouldn’t chase down a person who is not interested.  We shouldn’t lower our standards to get a spouse.  We shouldn’t settle for being the “side chick.”  We need to relax and continue to do what God has called us to do.  We should trust God and know that when he is ready he will provide just the right person.

Remember there may not be anything wrong with you.  Maybe God is protecting you from all the wrong people!